In 1989 an 8.2 earthquake almost flattened America, killing over 30,000 people in less than four minutes. In the midst of utter devastation and chaos, a father left his wife safely at home and rushed to the school where his son was supposed to be, only to discover that the building was as flat as a pancake.

After the unforgettably initial shock, he remembered the promise he had made to his son: "No matter what, I’ll always be there for you!" And tears began to fill his eyes. As he looked at the pile of ruins that once was the school, it looked hopeless, but he kept remembering his commitment to his son. 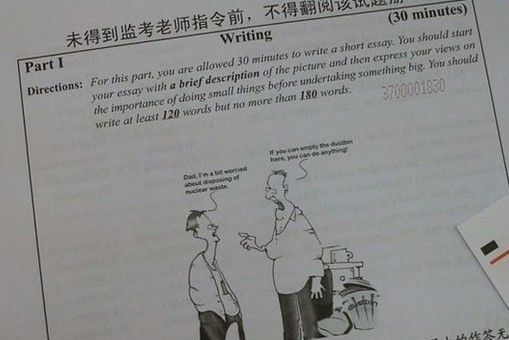 CCTV news is my father’s favorite TV program. In that program, there is a session called foreign news. Believe it or not, every time after the president of other countries gave a speech, my father would ask me, hey son, what did they say? Translate it to Chinese. I mean, if they spoke in English, that is OK. But sometimes, they might speak other languages like German or French, which I did not understand a single word. At those moments, my father was very angry, hey son, I paid you in college to learn that. Now you tell me you don’t understand. Good evening, ladies and gentlemen, my name is Harry. I was an English major student. Today, I am gonna share with you the experience of being an English major student.

Being an English major student, I found life was not easy. People around me used to ask one question. Why, why did you major in English? The reasons for this question vary from people to people. Some people major in English because they dream to be a diplomat like Lizhaoxing, and other people learn English in order to be translators or English teachers. I was different. I learnt English because I didn’t get a high mark for economics or managements in college entrance examination. At that time, I only had two choices, Chinese and English. Because I could speak Chinese pretty good, so English it is. Being an English major student, I found there were so many girls in our class. More girls meant few boys. It is true. We had 4 boys back in college. Our class never participated in any basketball game, simply because we didn’t have enough players. We ranked the last one in all school’s sporting meeting. This never changed in college. Things got even worse in postgraduate. The number of boys decreased to 3. Then the only pleasure for us, mahjong was gone, and we began to play 斗地主.

Some people might say that having girls in class is good. It means we are more likely to have a girlfriend. Long hair, short hair, tall, not tall, you could choose any type you like. But things do not develop as you think. Back in college, I found that those girls in our class were not interested in us at all. They loved the handsome that could play basketball well. They loved the boys majoring in economics, engineering, and medicines. They thought those major students were more likely to be rich in the future.

Being an English major student, I thought my life was so sad. English was not even my first choice. Then one day I found I was not that special. In fact, it is natural that people sometimes cannot major in the subject they liked. Just like me, many people majored in law because they didn’t get enough marks for finance, many people major in finance because mathematics failed them, and many people majored in mathematics because they were not qualified for engineering. Faced with this situation, you can chose to complain all day along and refuse to accept this pathetic fact. Or you can live a positive way, then you will find it has some surprising benefits too.

Being an English major student, especially for the male English major student, you are more likely to be a super scholar. Because skipping from class was quite difficult or even impossible. If one girl was missing, the teacher could barely notice. But if one boy was missing, that’s the end of the world. Because we never skipped from classes, so our academic performance was much better than the girls. One of us went to a very prestigious university in USA for his doctor degree, and he was the only one.

Also, being an English major student, you are more likely to be a popular person in your work. When your boss want to travel in other countries, they always need a translator; when the HR of your company want to take the TOEFL exam, he or she will always ask you for advices; when the company plans to recruit some talent to be in charge of the overseas business, you will be their first choice. Then you will find all the things you have learnt for years suddenly become something so valuable. Your colleges envied your special skills, and they dreamed to know English well just like you.

Ladies and gentlemen, I was an English major student, and I was, I am and I will be proud of that. He began to direct his attention towards where he walked his son to class at school each morning. Remembering his son s classroom would be in the back right corner of the building; he rushed there and started digging through the ruins.

Talking in the cartoon are two man, whoare a boy and his father. The boy is worried about the expectable impacts thedisposal of the nuclear waste may cause, while his father is telling him thatwhat matters now should be emptying the dustbin in front of them。

As he was digging, other helpless parents arrived, clutching their hearts, saying: "My son!" "My daughter!" Other well meaning parents tried to pull him off what was left of the school, saying: "It s too late! They’re all dead! You can’t help! Go home! Come on, face reality, there s nothing you can do!"

It is the profoundimplication beneath the surface of this simple and sarcastic drawing that oughtto be taken into account: one who can cope with small tasks first can thenundertake something big. Taking a look around, we can easily find some studentsdreaming of their brilliant future but unwilling to attend classes or to dohomework, some netizens worried about the fate of our nation but refusing tobetter themselves first, some officials claiming their determinations in makingour society a better place but reluctant to give up parts of their owninterests. Such phenomena collectively reflect the fact that some moderncitizens, especially a number of young people, lack the spirit of "thinkbig, down to earth". This can be chiefly due to the fact that these peopleare so lazy and blind that they are only in want of a fruitful outcome butnever make any efforts. As a famous saying goes, you reap what you sow. Thosewho wants to fly but forget the power of the gravity will be sure to fall downon the ground and hurt badly as a result。

To each parent he responded with one line: "Are you going to help me now?" And then he continued to dig for his son, stone by stone. The fire chief showed up and tried to pull him off the school s ruins saying, "Fires are breaking out, explosions are happening everywhere. You’re in danger. We’ll take care of it. Go home." To which this loving, caring American father asked, "Are you going to help me now?"

According, I suppose it isimperative for us young people to understand that all that matters to us nowshould be to better ourselves. Not only are we supposed to learn knowledge andto enhance our abilities, we also need to take seriously the assignmentsconfronting us. I believe only after each of us manages to strengthen himselfor herself will the problems worrying us now be settled in the days to come。

The police came and said, "You’re angry, anxious and it s over. You’re endangering others. Go home. We’ll handle it!" To which he replied, "Are you going to help me now?" No one helped.Courageously he went on alone because he needed to know for himself: "Is my boy alive or is he dead?" He dug for eight hours...12 hours...24 hours...36 hours...then, in the 38th hour, he pulled back a large stone and heard his son s voice. He screamed his son s name, "ARMAND!" He heard back, "Dad!?! It s me, Dad! I told the other kids not to worry. I told them that if you were alive, you d save me and when you saved me, they d be saved. You promised, No matter what happens, I’ll always be there for you! You did it, Dad!" "What s going on in there? How is it?" the father asked.

"There are 14 of us left out of 33, Dad. We’re scared, hungry, thirsty and thankful you re here. When the building collapsed, it made a triangle, and it saved us."

"No, Dad! Let the other kids out first, cause I know you ll get me! No matter what happens, I know you’ll always be there for me!"